In Iowa it’s a habit: drink a beverage from a bottle or can (purchased in Iowa) and then take it back to the certified redemption machine at the grocery store for $0.05. You’ve already paid the $0.05 per mineral water, alcohol, and carbonated beverage in metal, plastic, or glass containers, so it makes sense to redeem and get your money back. Sure, it’s not much, but for a family or after you host a big party, it adds up! It’s been that way since 1978 when Iowa’s beverage container recycling program began. Iowa is special from other states’ redemption programs in that no money goes to or flow from the Department of Natural Resources and “all of the exchanges of full product, deposits, empties, refunds and handling fees all take place entirely among the Distributors, Retailers, Consumers, and Redemption Centers.” (If you want to read more about how the system actually operates, click here.)

Deposits Up for Debate

The state legislature is now trying to decide if the program is still worthwhile. House Study Bill 163, proposed by the House Study Subcommittee on Environmental Protection, would repeal the current bottle deposit program.

If passed by the legislature, the Act would create a litter control, recycling program, along with a community enhancement initiative to enforce elements like recycling program fees and community enhancement excise taxes. If passed, the bill would take effect on January 1, 2018. There are all sorts of policy details in the bill, but essentially it would make it so the fees beer wholesalers pay on containers would be directed into a fund earmarked for recycling projects. It would also enact a tax collection on beverages of fifteen-thousandths of 1%, which would go toward programs reducing litter.

Before jumping into the debate, it’s valuable to take a step back and see who supports what. On this issue, grocery and convenience stores in Iowa are supporting the repeal of the container deposit and are in favor of a replacement program. 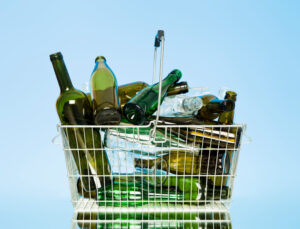 Empty glass bottles in a wastebasket on blue background

In an interview with the Des Moines Register lobbyist Brad Epperly, representing the Iowa Grocery Industry Association, shed light on the issue: “All you want to do is keep the status quo. And what the status quo is, it brings garbage into our grocery stores. And you know what, grocers have made investments too, folks — in machines, in people, in square footage that they can’t use to generate revenue.”

Supporters of the bill also cite an increase in accessibility of recycling programs, so the bottle deposit program is not necessary as people can recycle their containers at home.

Opponents of the bill say that repealing the pro-recycling program hinders progress for the state and could increase litter. They argue the bottle deposit program can be improved upon, but works and therefore shouldn’t be repealed.

A high participation rate of both individuals and businesses in the bottle deposit program seem to support the “it works” opinion. Because of the “Bottle Bill” 82,352 tons of beverages are recycled each year (as of a 2013 statistic). Approximately 86% of the 1.65 billion beverage containers sold in Iowa are redeemed annually, according to the Iowa Department of Natural Resources (Iowa DNR). The DNR puts this into perspective: “The current deposit law prevents litter and recycles 82,352 tons or 190,850 cubic yards of material per year–equivalent to a line of 784 large railroad box cars stretching more than 68,000 feet long.”

Programs like the Bottle Bill not only reduce litter and increases recycling rates, it also helps many organizations and individuals as a way for extra financial support. Some organizations have ‘can drives’ which act as fundraisers while our homeless population may use the money received to eat and overall survive. It’s also how, as a child, I became interested in recycling. (Who didn’t like extra money as a kid?!) The unfortunate side is when you deal with garbage, it’s going to be messy, or trashy if you will. Since the $0.05 deposit hasn’t increased since 1978, it’s hard for redemption businesses to survive. This has left grocery stores to deal with majority of the ‘mess.’

In my opinion, we need to keep the bottle bill intact and we need to increase the amount of the deposit returned to $0.10 and include more containers such as water bottles to focus more on closed loop systems. Check out these incredible recycling facts which include information about aluminum and glass, the best materials to be recycled. Also, sign up for RecycleMe Iowa, it will make your life easier and happier.

The bill is expected to be advanced through the full House committee soon. What are your thoughts on this issue? Let us know on Facebook or Twitter. If you want to support a super duper recycling program, see how RecycleMe Iowa can make it even easier for you to do good from your personal residence, place of employment, or enlist us for your next community event.